My, but it has been a long time since my last post. I have been reading your blogs and commenting as time permits. The good news is, I have been able to get some writing done on my novel. More on that in the next post.

Over the last year, many blogs have discussed the importance of keeping a writer’s notebook. Something you carry with you to jot down things like: potential plot lines, interesting characters you see, phrases, dialogue, scenes, landscape, tag lines, poetry, pictures, and anything else that fires your imagination. Almost every writer I know of uses some form of ” The Notebook”.

I actually keep three active notebooks, one at home, one at work, and one in my commuter backpack. My home notebook goes with me when I take the CEO of my domicile on shopping excursions and to writer’s group meetings. It may sound disorganized but it seems to work for me. All three are used daily. They are not fancy, just spiral bound notebooks with hard covers

Last week I watched the Michael Jackson “BAD 25” special. Normally not my first choice of entertainment, it turned out to be kind of interesting. It included interviews with his many collaborators and went into some detail on the process of generating and producing songs. During one segment that discussed the song “Man in the Mirror”, we got to see the lyricist’s notebook in action. The album’s producer, Quincy Jones, was looking for a “feel good” anthem song for the album. He contacted songwriter, Siedah Garrett, and asked if she would work one up. She agreed and immediately pulled out her  “Lyric Book” to find a fitting theme. One line she remembered from a conversation months before pinged in her head.

At this point in the interview Ms. Garrett opened her actual “Lyric Book” and opened it to the page with the line that simply read, “Man in the Mirror.” The close-up of the pages was interesting as it showed how Ms. Garrett used her book.There were lines and lines of potential lyrics. Some just a few words and others were several lines long. Notes filled the margins and there seemed to be some color coding used as well.  It looked like any other Writer’s Notebook only tweaked to fit her specific “Genre”, song lyrics.

At the time she wrote the line in her book, she did not know that one day it would become the basis for a number one hit by Michael Jackson. She did not rely on her memory; she wrote it down because it sounded interesting. It could have been used for any number of song ideas. By the way, it would make a great flash inspiration piece, wouldn’t it?

We all use our Notebooks differently and that’s okay. It was interesting to me to see a how a world-renowned song writer used hers.

I recently wrote a scene introducing one of my antagonists. It did not feel right and I wanted to make sure this scene was right before I moved on. So, this weekend, I was killing time in a parking lot at the Domestic CEO’s favorite shopping facility and pulled out my Notebook. I started thinking about the plot and how each of the character’s should be introduced and when the major plot conflict should be inserted. I started by writing down the sequence as I originally worked it out. Then I began playing with the order that the character;s are being introduced and the then jotting down the effect that might have on the plotting. I tried to write down every possible combination. It sounds like story-boarding but, at this point it was more brain storming. After several pages, I reviewed the possibilities. One jumped out at me as the best approach based on the character types involved and overall story arc. However, I could see that given different character traits or slightly different plot line, several of the other sequences might be usable. I just know that I will revisit this list on some later project. Lord knows I won’t remember each possibility without it. 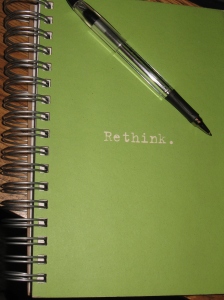 The solution I found is making me rethink the opening scenes. However, I believe the middle will be much easier to write once the characters and plot hooks are introduced properly.

Posted by Dennis Langley on November 26, 2012 in Other Strangeness

15 responses to “Writer’s Notebook in Action”